on May 05, 2017
Note: We're not including Jedi or Sith apprentices. If we did, then that makes Darth Vader a sidekick. 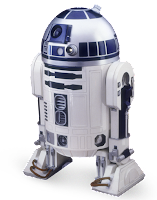 10. Todo 360 (Cad Bane's droid from the Holocron Heist episode of Clone Wars)
The perfect sidekick for a bounty hunter. This little droid is cute and ominous at the same time, and can fly around and perform nearly any function.

9. Bib Fortuna
He's kind of evil, he seems reliable, and he is gullible (as Luke showed us with his Jedi mind trick). Only what kind of a name is Bib Fortuna? This Star Wars name has always struck me as weird.

8. Lobot
Although he speaks not a word, Lobot's cybernetic head implants make him memorable. Lobot is hooked up to Cloud City's central computer system and is as reliable as a computer, for he essentially is one.

7. Kitster
As obnoxious (if he is at all) as his best friend Anakin Skywalker, Kitster is a supportive friend and with the little he does and says in the movie, is still a memorable character.

6. Salacious Crumb (Jabba's little monkey bird lizard guy)
I'm taking this opportunity to share how the character got his name: Creature shop designer Phil Tippett went with some friends to a bar as they were thinking of a name for the character. At the end of their bar excursion, Tippett said to his compatriots, "Hang on a second guys while I tie my soolacious", instead of "shoelaces", because he'd had a couple pints. Salacious evolved from "Soolacious".

5. Chopper
Chopper, the grumpy old astromech droid from Rebels (and Rogue One! Did you catch his cameo appearance?) complains a lot, but is mature enough to accept his job at all times.

3. Chewbacca
He could have been #1, but people might want a sidekick that felt more like a sidekick and doesn't rip your arms off. And a droid doesn't, so...

2. BB-8
Little BB-8 is the rolling droid from the new movie The Force Awakens. BB-8 is a bit of a chatterbox, but its (yes, its - BB-8 is androgynous, er, androidgynous, hee hee) ability to go extremely fast on its big wheel and thumbs-up scene reinforce what a good sidekick BB-8 is. But it hasn't exactly been the same kind of galactic hero as...

1. R2-D2
R2-D2. The ultimate best friend. This droid will do many things for you as a reliable sidekick, including but not limited to: