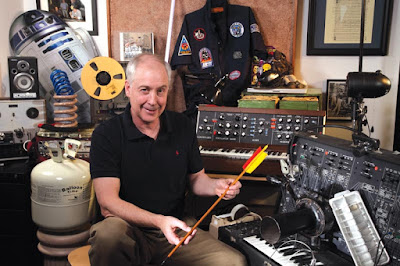 10. Sando Aqua Monster
This is actually a baby crying, played very slowly. Ben Burtt (pictured above) created this sound and many of the others on this list.

9. Poggle
He speaks in clicks, burps, and farts, and all of these are gravelly. Poggle expresses a lot through just a few sounds...albeit disgusting ones, so he's not very high up on this list.

8. TIE Fighter
If Star Wars went by science, we wouldn't have this sound, for there is no sound in space. The high-pitched squeals of the TIE fighter make it haunting and spellbinding at the same time.

7. Podracer
Whether it's the loud engines of Sebulba's podracer or the sound of Quadinaros's podracer blowing up,
all podracer sounds are a modified version of an electric toothbrush. Yes, a toothbrush.

6. Seismic Charge
First, there's nothing. Then, a very loud something. Jango Fett's seismic charges are fear-inspiring and create a lasting impact, enough to make you work in the sound department.

5. Blaster
The blaster is one of the definitive sounds of Star Wars and science fiction in general (although in my opinion, Star Wars is fantasy, not sci-fi), being quick, high-pitched, and appropriately striking.

4. R2-D2 Beeping
R2-D2 expresses joy, sadness, and can even give the occasional sing-song response. Ben Burtt would create in beeps what he thought R2 was saying in English: "I'm hungry", or "Look out, the stormtroopers are coming", or "Gee, look at that explosion."

3. Darth Vader Breathing
This ominous sound helped restore George Lucas's faith in his villain and is synonymous with the iconic character.

2. Chewbacca
Another sound synonymous with the character. Chewbacca expresses many emotions through his growls, which are a combination of many animal sounds.

1. Lightsabers
The ultimate sound effect from a galaxy far, far away. The unique hum and clash of a lightsaber was developed by Ben Burtt using an elaborate sound machine, playing many different sounds at different pitches and speeds.