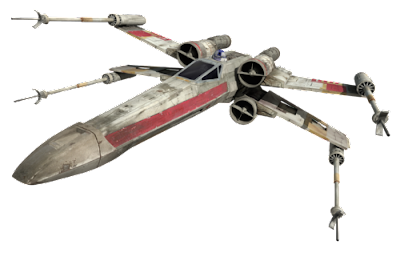 10. Vulture Droid/Droid Starfighter
Is it a droid? Is it a starfighter? Actually it's both. It's one of the creepiest looking starfighters in Star Wars, and was also one of the first Star Wars Lego sets (set 7111 Droid Fighter - 1999)

8. ARC-170 Starfighter
This clone-piloted starfighter is seen in the Battle over Coruscant in Revenge of the Sith. It's a reliable ship that also needs two clones to pilot.

7. Y-Wing
The Y-Wing was first used by the Republic during the Clone Wars and eventually became part of the Rebel fleet. Its design makes it a good ship for any battle.

6. B-Wing
The B-Wing has a gyroscopic rotating cockpit and is the largest single-pilot starfighter in the Rebel fleet. It can fly up, down, left, and right, but hardly needs to turn to do it.

5. Jedi Starfighter
Jedi have chosen well with this design, which comes in Interceptor forms, regular pointed forms, and even a pod-like form for Yoda to pilot.

4. A-Wing
A-wings are small, speedy, and can destroy an Imperial Super Star Destroyer, as Return of the Jedi showed. Being small and speedy is something you should value in your starfighter.

3. Naboo Starfighter
This elegant ship is as sleek as the Kom'rk, and flies as well as a Podracer. Although I wish it didn't look so computer-generated...

2. X-Wing (seen above)
This starfighter is an iconic Star Wars space vehicle, and took down the first Death Star. X-wing pilots read like a "Who's Who" of Star Wars icons. All we can hope for is that Luke will pilot one again as an old man.

1. TIE Fighter
The fastest, most varied, and most incredible starfighter Star Wars has ever produced. There's the regular TIE, the Darth Vader TIE Advanced, the Double TIE, the TIE Interceptor...I could go on, but it's time to TIE this list up.