on August 25, 2017
Star Wars is a great film series, but it's had its fair share of terrible characters - and not all of them have been in the prequels. This list is not meant to show that George Lucas is selfish and hates his fans (I've heard of Star Wars fans who think that) but, rather, that in all eras of Star Wars (movies, TV shows, expanded universe) there are terrible characters that lack creativity in their creation.
10. The Guavian soldiers, or as they're better known, the "Target troopers" from Episode VII.
Target seems to love their Star Wars as much as their megaphone-wielding moms, and the Guavian soldiers from The Force Awakens just feel like product placement in their character design - all red, but with a design that looks like a Target logo on their head.
9. Jar Jar Binks. I actually don't think he's that bad, but I'm pretty sure that if I didn't put him on this list, Star Wars fans would stop reading my blog. Jar Jar may have ruined the movie franchise, though I don't think so. I also don't want to share any more of my feelings on the prequels, for fear that they may be controversial with Star Wars fans.
8. Snoke, if he turns out to be someone we've seen before. If Snoke is really what any popular fan theory says he is, that automatically puts Snoke on my list. Snoke needs to just be Snoke. If Snoke is revealed to be something like, say, Mace Windu, he's automatically worse than Jar Jar Binks. Snoke needs to have an original backstory.
7. All Hutts not named Jabba or Rotta. Jabba's the original Hutt, and Rotta is the cutest little thing, but now we have Hutts like Ziro from Clone Wars and Graballa from Freemaker Adventures, which speak in high-pitched voices. But neither are the worst Hutt character in Star Wars. That would have to be Huttfield. Huttfield is from Jedi Academy #4: A New Class by Jarrett J. Krosoczka. A comic strip featuring Huttfield, parodying Garfield, appears throughout the book. I couldn't find a picture of Huttfield, but he's essentially Garfield drawn as a Hutt.
6. Yoda. Or rather, Yoda as Jarrett J. Krosoczka draws him. Yoda isn't a bad character unless he's drawn like this... 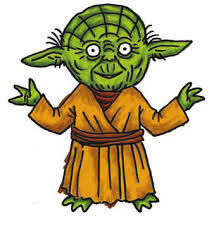 Once you see Brown's Yoda, it starts to look more like Yoda because Krosoczka's Yoda looks nothing like the real Yoda.
5. Boss Nass. Only Gungan worse than Jar Jar Binks. He is a computer-animated bizarro that spits up phlegm. Who thought that would be funny?
Oh wait, George Lucas did. I do admit Boss Nass is one of the major things wrong with Episode I, and think that he could have been better if he were made with practical effects, didn't spit all over people, and had a different voice.
4. Lieutenant Valeria. This completely unnecessary rebel pilot character from The Freemaker Adventures Lego TV series is mainly on the list because I'm convinced she has the same voice as the infamous jive-talking Lowes refrigerator magnet giraffe, who is already racist and sexist. She's completely unnecessary because they could have easily given her parts to Luke so we could get more Luke instead of the Lowes giraffe's vocal doppelganger.
3. Gonk droids. Let's leave it at this: They are a wastebasket with legs. Even the background characters in Star Wars should be creative, as proven in some Star Wars material, but not others. The gonk droids violate this detailed agenda that I hold Star Wars to. And what sound do gonk droids make? "Gonk, gonk, gonk." If George himself came up with the concept of the gonk droid, then that may explain why I hold him to a lower standard than Lauren Greenfield, who I recently sent my screenplay "Fearless Girl" to. (Click on "Lauren" to read "Fearless Girl".)
2. Gormaanda, the four-armed alien Julia Child parody from the 1981 Star Wars Holiday Special. The fact that it's from the Holiday Special, which George Lucas, creator of Boss Nass and gonk droids, doesn't want the fans to see and is ashamed of making, explains why this character is #2, as well as the fact that it's a four-armed alien Julia Child parody.
1. Becky Smoochenbacher. Here's the story behind Becky, from the Freemaker Adventures Lego TV series: She was Zander Freemaker's girlfriend, then she goes and joins the Empire, then she rescues the Freemakers on the second Death Star in the last episode of Season 2. You know it when she's coming, you can tell the mystery Death Star guard in the last episode is Becky. And when she takes off her helmet, she's hilariously objectified - her hair blows a little, she even waggles her Lego rear end a little. HOW DID THEY GET AWAY WITH THAT? This is startlingly sexist! And her last name is Smoochenbacher, implying that women are for smooching and/or this character only exists to be smooched. Becky is the anti-Rey.
But good news - I am counteracting sexism with my screenplay "Fearless Girl", which you can read, see my letter to Lauren Greenfield about, and see Lauren's ad that provided the basis for the story by clicking on her name. Enjoy my screenplay, free of the simplicities of gonk droids, the product placement of the Target troopers, the lazy backstory Snoke might have.
And if you're begging me for a Snoke theory, I don't exactly have one yet. Unless he's President Trump.
Star Wars