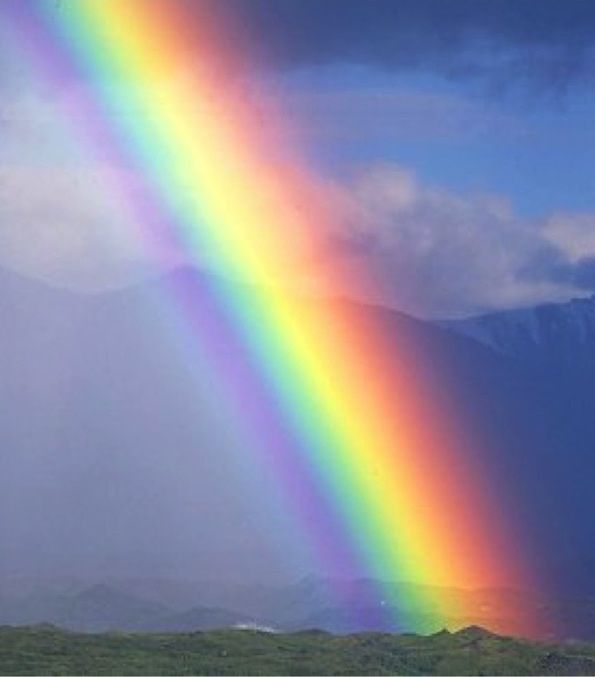 At about 7:50 in the evening last night (May 28), I went outside, feeling disappointed, disconnected, and disillusioned. I muttered to myself sadly, but then, out of nowhere, when I looked up, I saw a rainbow in the sky.

My feelings changed instantly when I saw the rainbow. It felt like a bolt of hope to inspire me amid my despair, but if that was not enough, from the direction of the rainbow, I saw an object flying around in the sky. I realized it was a red balloon. I watched the balloon tumble under the rainbow, then followed it through the air. I moved to get a better look at the balloon, but then looked up and discovered that it had disappeared!

My gut instinct prompted me to run up to the house of some neighbors I know. They have a little daughter. She's five years old, and every day when I go on my walk, she's  in her front yard, and she smiles at me and says hello. Her mother answered the door, and I described seeing the rainbow and the balloon. I finished by telling her, "I wanted to ask your daughter about this, because I think that, in her five-year-old wisdom, she can tell me what this means."

Her mother was near tears. She put her hand on her heart and said, "Do you know how much this means to me?" I paused. She explained that two weeks earlier, she had been diagnosed with breast cancer, and had not yet told her family. My mouth came open - not only because I felt sorry for her, by incredible coincidence, I am getting ready to write a screenplay about breast cancer, inspired by a children's book called "Ruthie and the Pink Fairy."

I ran back to my house, grabbed "Ruthie and the Pink Fairy" from under my bed, and ran back to their house. I gave the book to the ailing mother. She looked at the cover, flipped through the book, and her eyes began to water even more. She called her entire family out to see the rainbow, which was still glittering in the sky, and I took their picture in front of the rainbow. Then I said good night, and the family took the book inside with them.

I walked up the street alone, smiling, feeling more inspired and hopeful than I had in a long time.